In contrast to the failings of the Mustang II, the Fox Body Mustang — the third generation — is one of the longest-running Mustang generations. The Fox Body is the car that saved the Mustang — impressive performance capabilities, easy modifications, accessible price point and drivability make it one of the best muscle cars to date.

If you’re looking at Fox Body Mustang price trends, you might be scratching your head watching the third-generation Fox Body values increase in recent years. While the original 1964 to 1973 generation Mustang is and likely always will be among the most valuable of the generations, this spunky third-gen car is making a surprising comeback.

Why Are Fox Body Mustangs So Expensive?

The reasons Fox Body Mustangs are increasing in value are unique to this car. Some of the special qualities of the Fox Body include its:

Many know the Fox Body as the car that saved the Mustang. The failures of the Mustang II put the entire lineup in danger, but with multiple body styles and a variety of different options throughout the generation, the Fox Body cemented the legacy of the Mustang. This is one reason these cars fetch such a high price today — and it’s likely why they were the best-selling muscle cars of their time.

Buyers who bought these cars in the time frame in which they came out rode them into the ground. It’s incredibly rare to find a Ford Fox Body in new to mint condition, and after all, rarity is one of the major factors in higher-priced cars. When supply is down and demand goes up, so then do the prices.

In a recent Barret-Jackson auction, a 1993 Ford Mustang SVT Cobra R went for six figures, breaking records and leading to a steep increase in demand for Fox Bodies. In just a decade, simple, clean models of this generation have increased in value two to three times. However, not all Fox Bodies are worth a ton of money.

Many original Fox Bodies underwent significant devaluation for many reasons, from shoddy aftermarket paint jobs to mod parts that are less than ideal. Others suffered from use on the race track or drag strip, or worse, found themselves wrapped around a pole. Owners of Fox Bodies rode their cars into the ground because they were such an accessible muscle car and open to so many modifications. 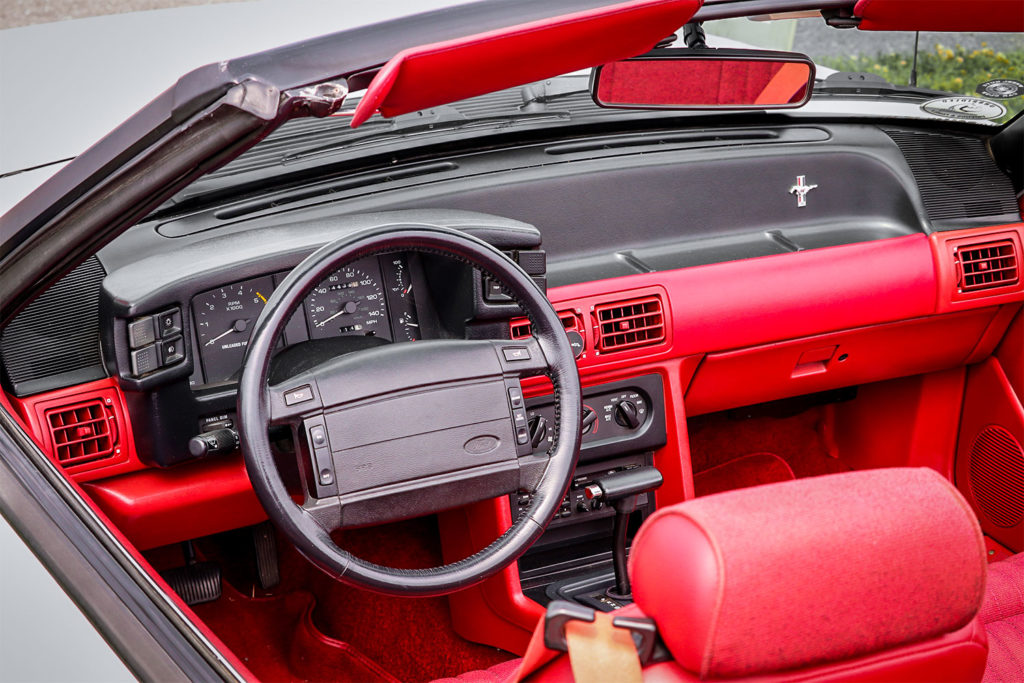 Low mileage, original condition Fox Bodies are especially rare, and so they run at especially high price points. A well-modified Fox Body Mustang might also fetch a good price, but only so long as it retains the essential look and feel of a Fox Body.

If you find yourself wondering if a Fox Body Mustang holds value, check out the stark price trends for these cars.

Top 10 Reasons Why Fox Body Mustangs Are so Expensive

With prices on certain models almost doubling in the past 10 years, there are many reasons Fox Body Mustangs are so expensive nowadays.

In contrast to modern design aesthetics, the Ford Fox Body Mustang has an iconic boxy look. It also represented leaps and bounds in the Mustang range as the first aerodynamic Mustang styled after European design. The sloped front and hatchback design made it unique compared to the previous Mustangs, and it is perhaps one of the most recognizable coupes from the ’80s.

Fox Body Mustangs are incredibly easy to modify. Ford used the Fox Body platform on many different cars, so parts became easy to interchange, even between models. Because of the huge number of cars produced using the Fox Body platform, it has one of the biggest markets for mods and aftermarket parts.

The availability of aftermarket parts means you can buy or replace practically everything in this car. And what’s better? Prices for aftermarket parts are pretty affordable. With the values on this car rising through the roof, making modifications or repairs is a good investment into the future value of your car.

While today’s 480-horsepower engines make the 5.0 Fox Body Mustang seem like a toy, it was a benchmark of its time. A 4.9-liter V8 engine in these cars can produce horsepower in the 200s — for an affordable muscle car, that’s some incredible bang for your buck.

What made this car so appealing wasn’t just that it could perform well on a race track — it was ideal for daily driving, too. Most muscle cars are built for performance, so comfort tends to take a backseat. On the other hand, the Fox Body Mustang features comfortable front seats, a usable backseat and a convenient trunk. These features, plus A/C and a smooth ride, make the Fox Body Mustang suitable for everyday driving.

If you bought a Fox Body Mustang convertible in 2005 and kept it in clean, good condition, your car would be worth more today than when you bought it. With increases in value and this car’s entrance into the prime classic car time frame, investing in repairs and quality aftermarket parts will definitely get you a good return on investment — if you even want to sell. Most owners of these Fox Bodies tend to hold onto their cars because they’re such a good combination of power and usability.

Trends come back in style all the time. While you might not find Ford making Mustangs in the style of the older, boxier models, many people seek out those aesthetics. Car enthusiasts, especially those who grew up around the release of the third generation Mustangs, appreciate the iconic look of the Fox Body as a nod to simpler times — before classic rock was classic and when acid-wash jeans were popular, at least for the first time. 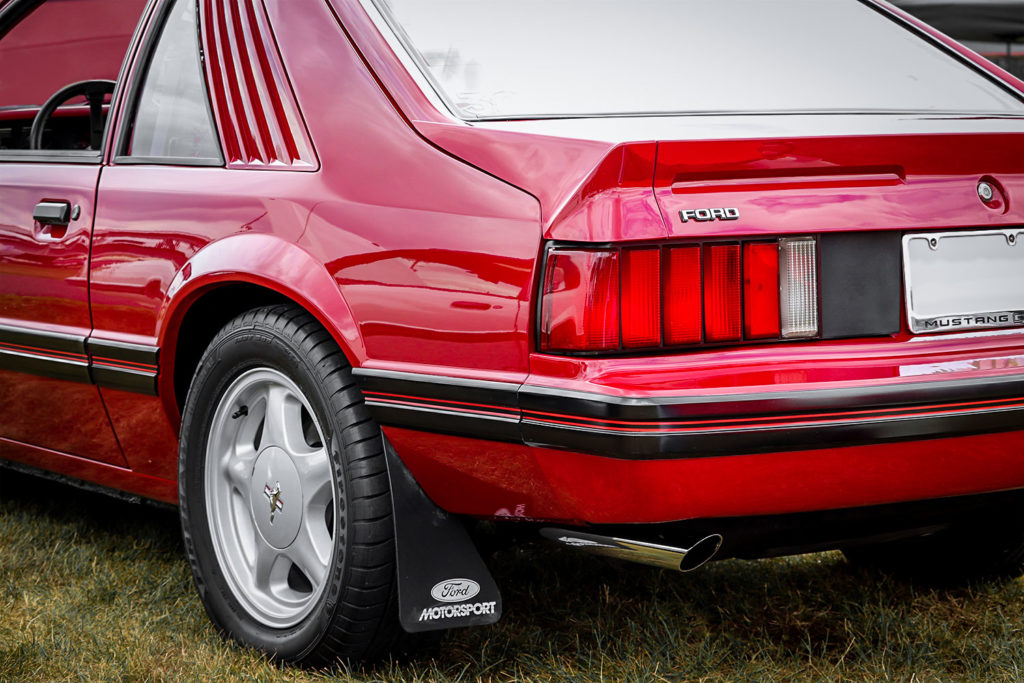 Ford made their third-generation Fox Bodies from 1979 until 1993, so there are a bunch out there. But it’s harder than you might think to find one in great condition. Because most owners really got their use out of these cars, there are few examples of low-mileage, pristine Fox Body Mustangs. But if you find one with a few mods you don’t like, the availability of aftermarket parts is so large for these cars, you’re sure to find something to your taste to replace it.

If you just have to have a classic muscle car but you need something you can take to work or on weekend trips, the Fox Body Mustang is the car for you. If you find a clean, low mileage example, you’ll be able to drive it in normal traffic conditions, plus take a few laps on the track whenever you want. With seats in the back, A/C in most models and a trunk, this is one of the most practical classic muscle cars you can choose.

Nostalgia and a timeless design combine to gather a huge cult following for the Fox Body Mustang. Because the Fox Body is so receptive to modifications, it also has a large following from newer fans looking for muscle cars they can customize easily and on a budget.

Classic cars tend to increase in value, but something perhaps no one foresaw was a drastic increase in price in one of the most overlooked generations of Mustangs — the Fox Body. While most people wouldn’t have turned their heads at a Fox Body two decades ago, growing nostalgia and interest in these cars means a steep increase in value.

In general, Ford Mustangs have increased in price steadily, following the larger market trends. In 1980, the average car price was around $7,000, which accounting for inflation is about $24,000 in 2021. Today, the average new car price is around $40,000, meaning even accounting for inflation, prices on new cars have grown drastically. Even so, the Fox Body has undergone even more impressive jumps in value.

Recently, a nice but rather ordinary ’92 LX 5.0 Fox Body Mustang Notchback sold for a whopping $37,000. Twenty years ago, spending that amount on a standard Fox Body would have been unheard of. 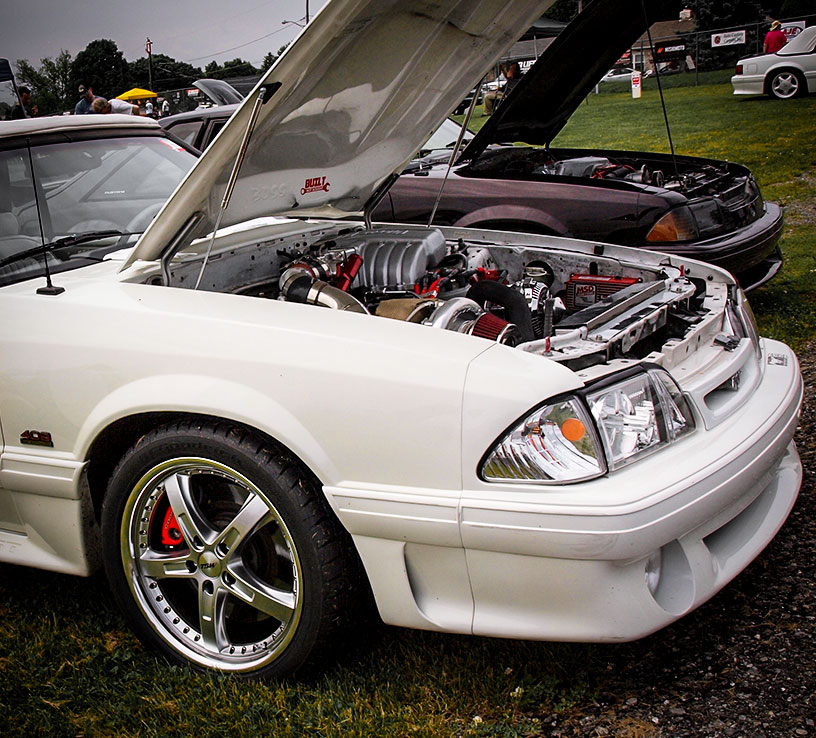 In the past five years, average price ranges for Fox Bodies have grown from around $6,000 to $10,000 all the way up to $13,000 to $20,000. Currently, prices for good condition, rust-free Fox Bodies mirror those of brand new cars. Spending around $20,000 for an almost 40-year-old car might seem questionable to some, but for those who know the value of these third-generation Mustangs, it’s a smart investment.

How Much Does a Fox Body Mustang Cost Today?

Today, clean Fox Body Mustang GTs with low mileage go for around $20,000 on the low end, but you’ll pay even more for attractive models such as the Cobra or the SVO.

With some of the best aftermarket parts for Fox Body Mustangs, Top Flight Automotive is your one-stop shop for practically any modification. With the largest in-stock inventory around and most orders shipping on the same day, you’ll find exactly what you need and get it exactly when you need it.

Browse our inventory of performance parts for third-generation Mustangs. If you have questions, contact us to speak with a qualified representative. 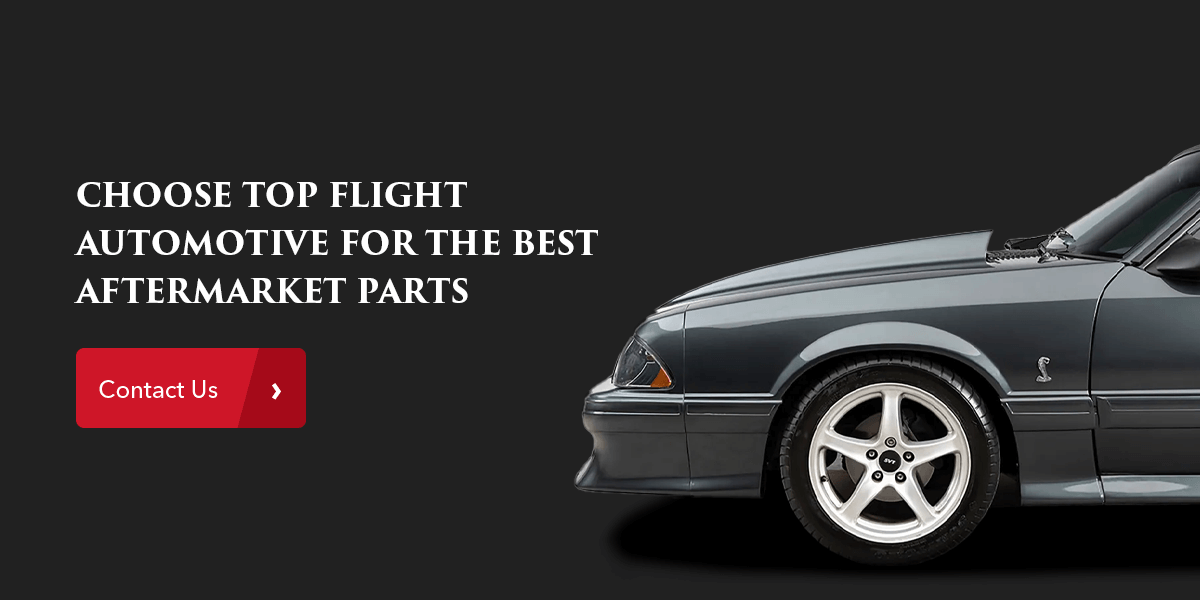