From basic beginnings to the high-tech cockpit of today, Corvette dashboards have changed with the times.

Dashboards. You look at one every time you drive a car. But do you think about it very often? Today’s high-tech “cockpit” style dashboards are light years removed from their humble beginnings.

Originally, the word “dashboard” applied to a wooden or leather barrier fixed to the front of a horse-drawn carriage or sleigh. Its primary function was to protect the driver from mud and debris “dashed up” by the horses’ hooves. As horses were replaced by horseless carriages and then automobiles, the dashboard became a panel to protect occupants from engine heat and oil, as well as a place to house vehicle instruments.

Tucked into the cockpits of Chevrolet Corvettes are some impressive dashboards. The following is a look at the history of the Corvette’s dashboard and how it has changed throughout the years. 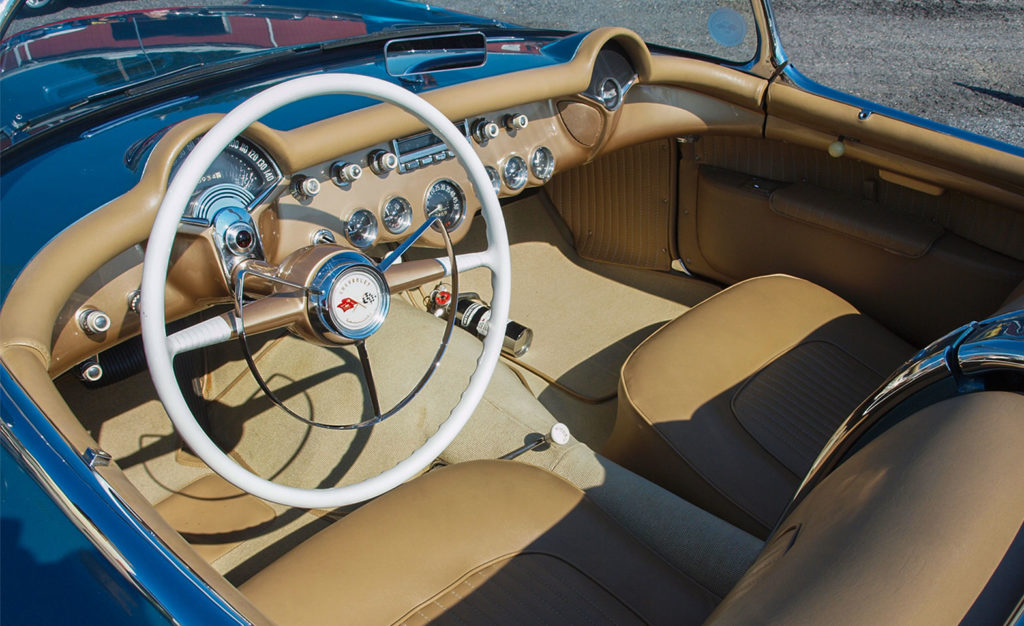 The 1953 Corvette (C1) is the first generation of the Corvette sports car produced by Chevrolet. It is commonly referred to as a “solid-axle” car, as independent rear suspension did not appear until the 1963 Sting Ray. The C1 had a production run from 1953 thru 1962. Only 300 units were sold in its first year.

Its dashboard is fairly straightforward. The gauges are located in the center of the dash, making it difficult for the driver to read. The large steering wheel contains another metal “half wheel” inside the outer rim, making for cumbersome steering. 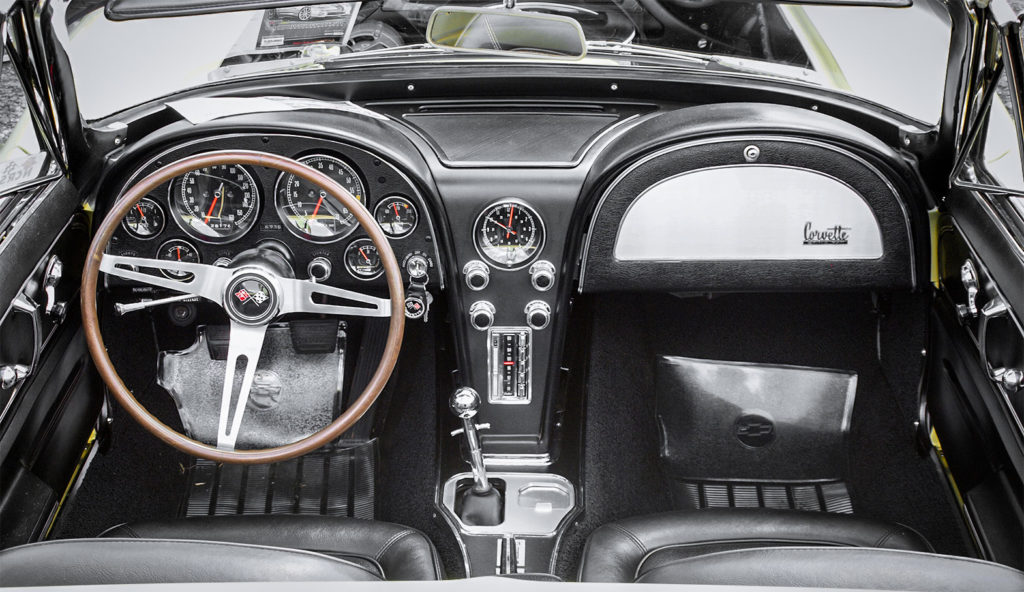 During the “Muscle Car Wars” of the mid-1960s the ultimate Corvette Sting Ray racer was unveiled in 1967 with the race-ready 427 L88 option package. The L88 option package featured a unique big-block hood bulge. The dashboard was equally as dazzling, as the gauges were now arranged behind the steering wheel, making for better driver use. 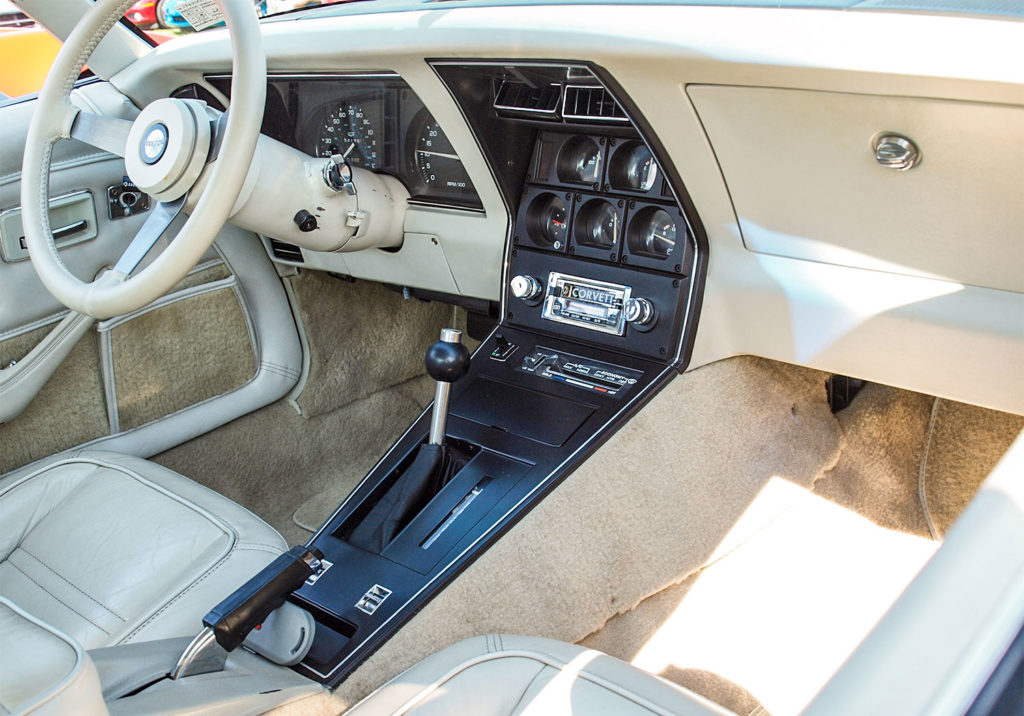 The 1979 Chevy Corvette L82 is part of the C3 generation of Corvette models, which were released between 1968 and 1982. The 1979 Corvette is one of the best selling Corvettes of all time, with more than 53,800 produced that year. It is known for its incredible design elements from its glass mirror-tinted roof panels to new bucket seats and a front and rear spoiler package.

Its interior design was a hit too. The dashboard was slightly slanted with nicely arranged gauges. In 1979 an AM-FM radio became standard and an optional cassette tape player was available for the first time. 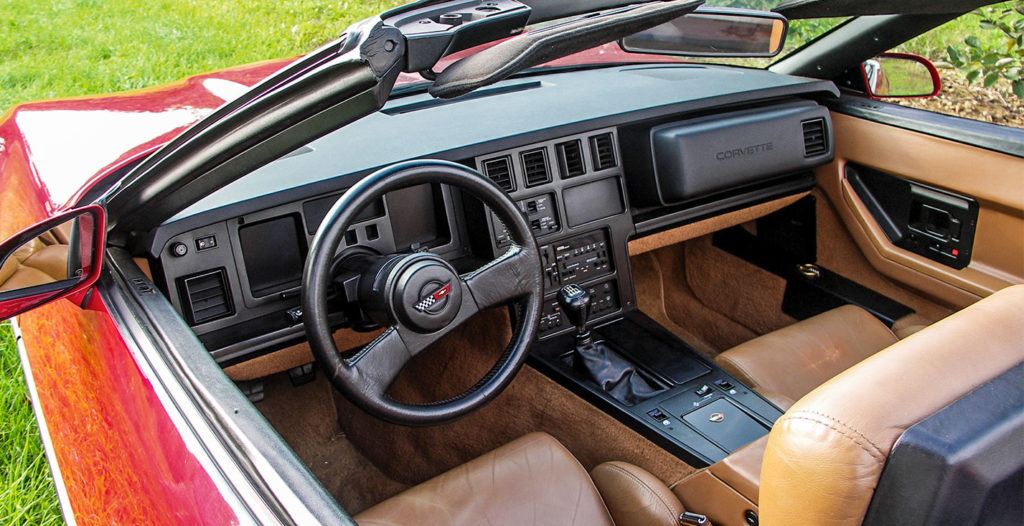 The C4 Corvette generation began its 12-year run in 1984. It sported a unique glass hatchback, and had only one motor option — the 5.7 liter 350 Cross-Fire Fuel Injection V8, or L83 engine.

This 1984 Corvette L83 came standard with an electronic dashboard with a digital liquid crystal display instrument cluster. It displayed graphics and digital information for speed and RPMs, fuel level and other important engine functions. The steering wheel was now completely padded, with no metal parts visible. 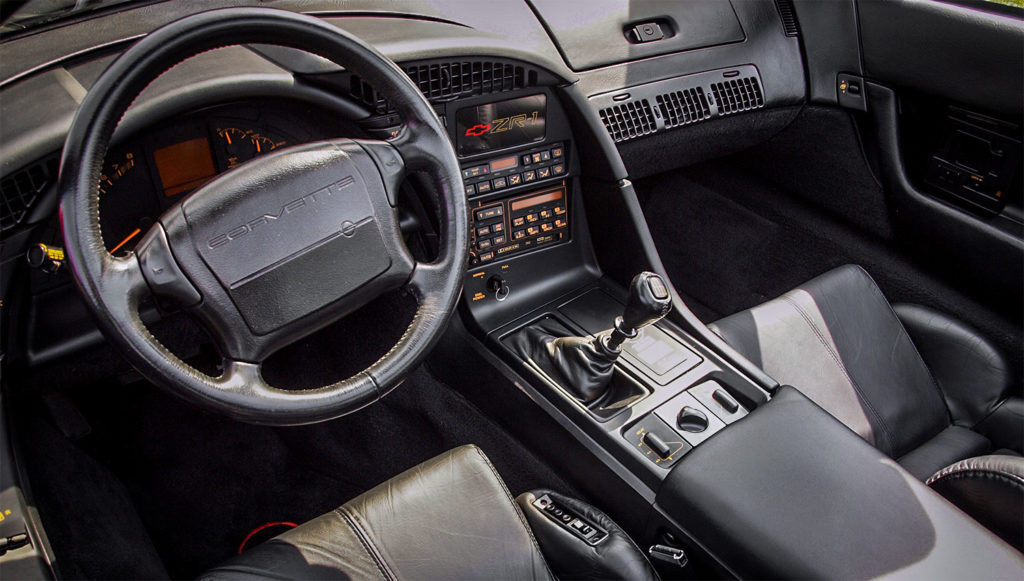 The 1990 Corvette ZR-1 is a fourth generation sports car from Chevrolet. This model is known for its high performance 375 LT5 engine, new chassis design, modern sleeker styling and interior improvements.

The 1990 ZR1 had its interior redesigned to accommodate a driver’s side airbag. The dashboard now catered exclusively to the driver with how displays were laid out. While still retaining the digital displays, this Corvette’s dash resembled the cockpit of an airplane. The ZR1 still retains a loyal following and serves as a milestone performance model in Corvette history. 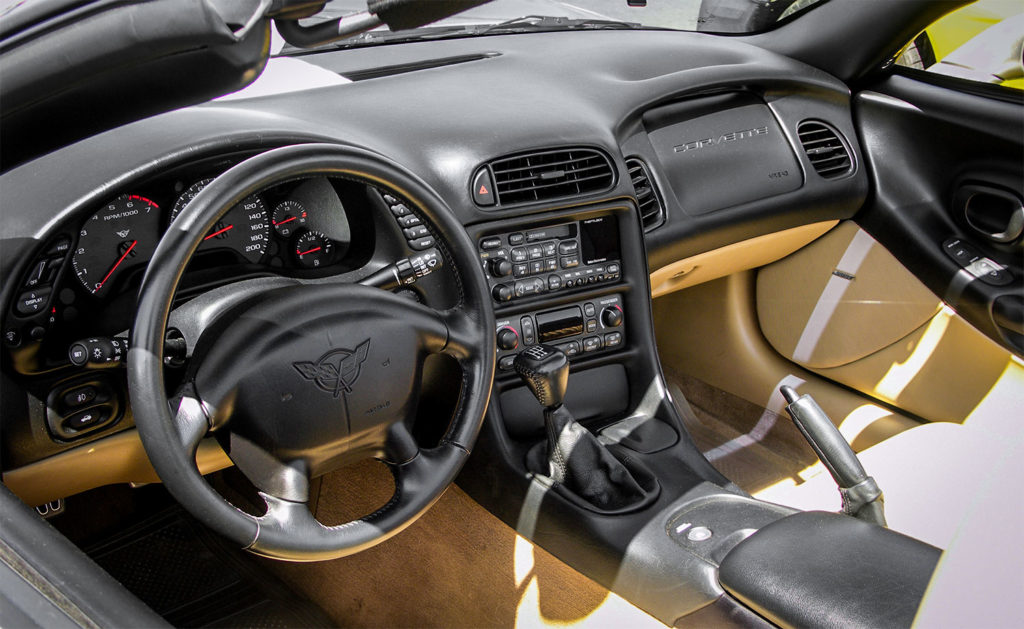 In 1997 the C5 Corvette generation began. The 1997 LS1 Corvette has the distinction of undergoing the most changes of any Corvette model since its debut in 1953. The changes were noticeable with improved braking, handling, ride and comfort. The C5 was faster, lighter, stiffer and quieter than previous Corvettes.

The C5’s cockpit was bigger, roomier and thoughtfully designed with comfort and ease of use in mind.

The dashboard, which was inspired by the C2 Corvette, had dual coves and conventional analog gauges, a departure from the troublesome digital gauges of the previous several years. With special paint and lighting the dashboard was high tech in appearance yet easy to read. 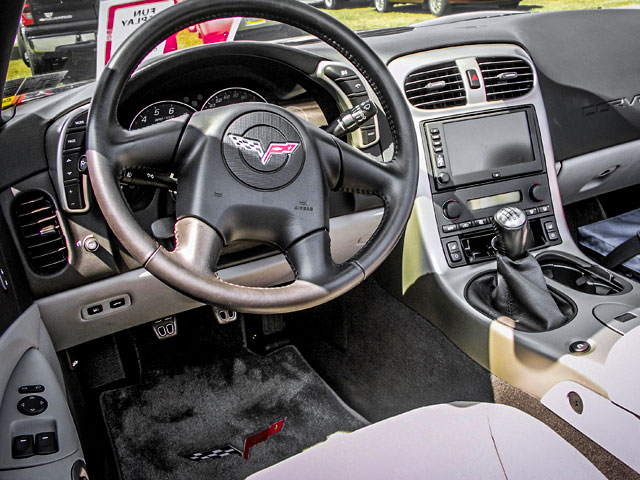 Corvette’s sixth generation began in 2005. The Corvette 2005 Z06 is considered the lightest of all Corvettes. The model saw the reintroduction of fixed headlamps, which were removed in the early 1960s.

The dashboard resembled the C5’s but had a new “twin cowl” theme to it that gave way to a clean, vertical, passenger side panel with a hidden airbag door. The dashboard sported a “high tech” look that was created with aluminum and faux-metal accents throughout the cabin. The gauges remained about the same as the previous year, however there was the addition of a C6 Corvette badge in the center of the speedometer. 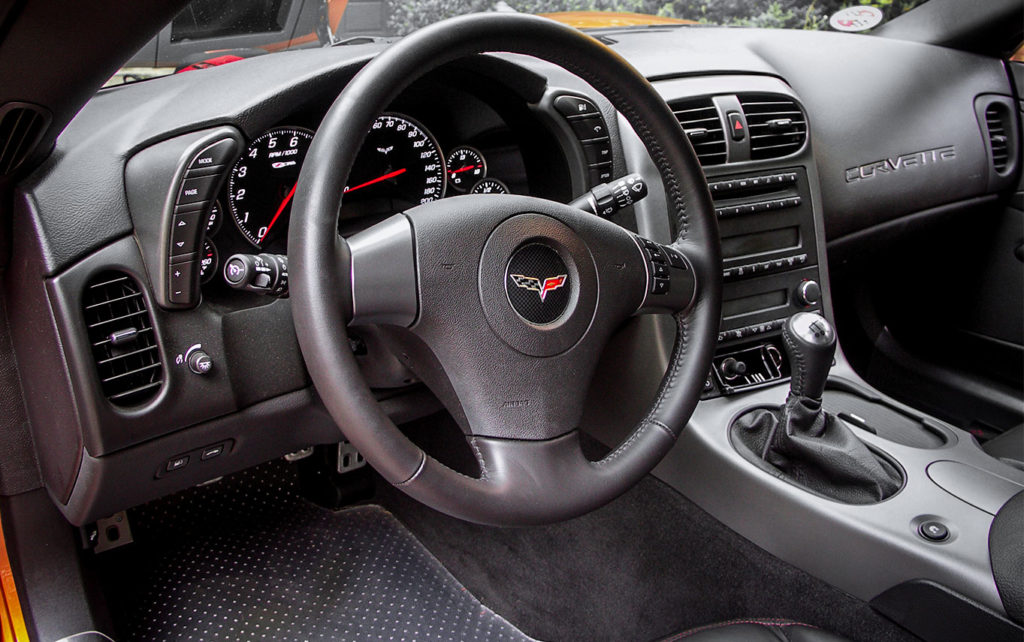 The 2006 Corvette Z06 was a member of the sixth Corvette generation. It was lightweight and powerful with the largest displacement small-block engine ever built and an output of 505 horsepower. The Z06 has larger front and rear fenders and an intake inlet scoop on the front bumper.

Consisting of a sleek composite body mounted on a separate frame, the 2006 Corvette Z06 showcased a lot of carbon fiber. The finely furnished interior had slight upgrades from the previous year, but introduced no new design or unique features. 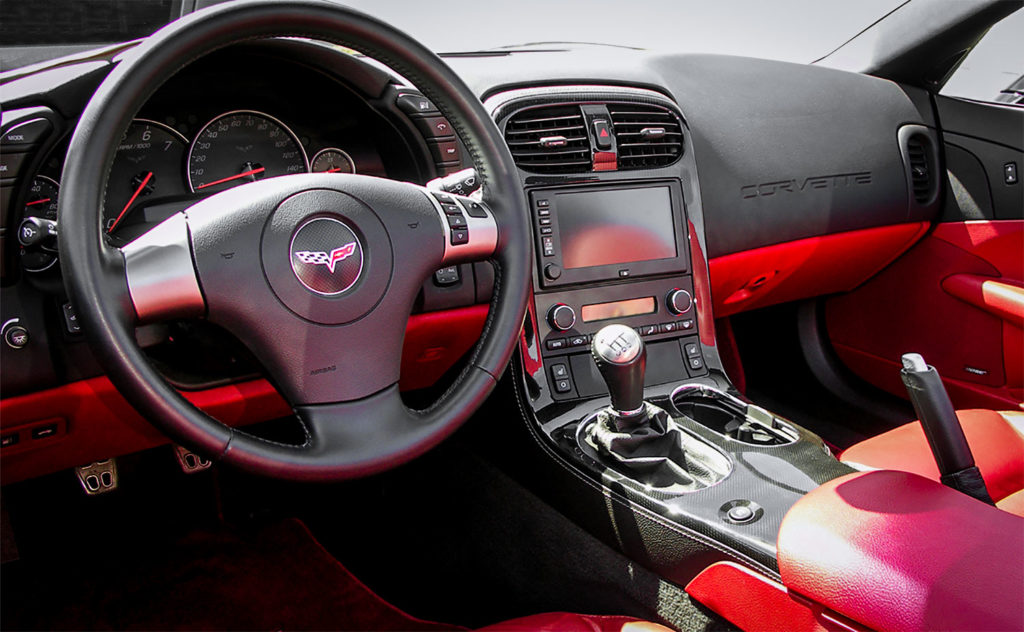 The 2008 Corvette LS3 is another member of the C6 generation. The main change for this model was the new LS3 designation 6.2-liter V8 engine. Interior trim enhancements included a wrapped center trim plate with brushed aluminum accents that surrounded the instrument panel and console. The 2008 Corvette LS3 saw the introduction of a new 4LT leather-wrapped interior package featuring a two-tone theme. 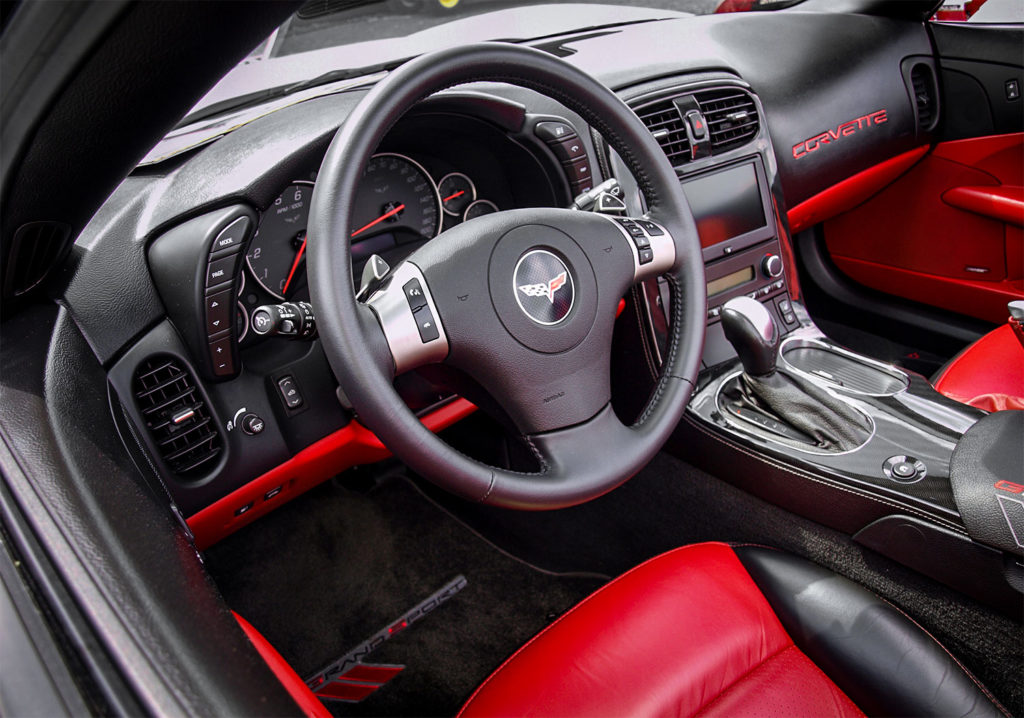 The 2010 Corvette Grand Sport shares its name with limited-edition models from 1963 and 1996, but was a new model line that replaced the Z51 package. Speed was the name of the game for the 2010 Corvette. It was incredibly fast and could accelerate 0-60 mph in 4.1 seconds with its manual transmission.

The 2010 Corvette Grand Sport kept most of its previous interior amenities as it made tremendous progress with increased speed. 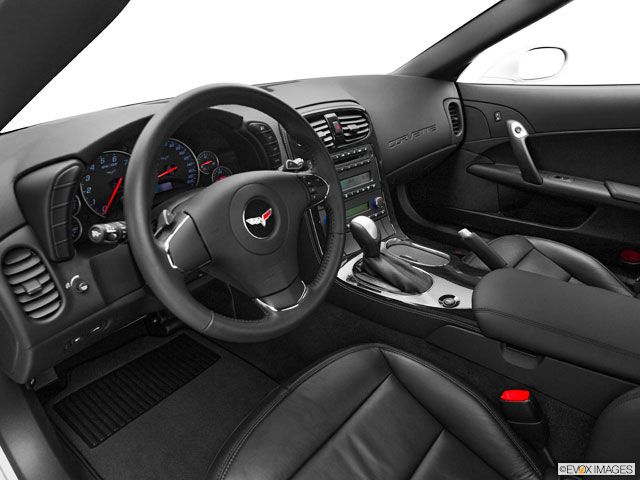 Considered a Corvette supercar, the 2012 Z06 amazingly surpassed the speed of its predecessor by achieving the 60 mph mark in just 3.9 seconds all while delivering respectable fuel economy.

Many changes made to the 2012 Corvette were in the interior, including a new seat design and steering wheel. The dashboard had less gauge clusters but was stylish and logically arranged.

Though acquiring the 2012 Z06 Corvette was costly, it was the least popular of the C6 generation models with only 12,000 units sold. 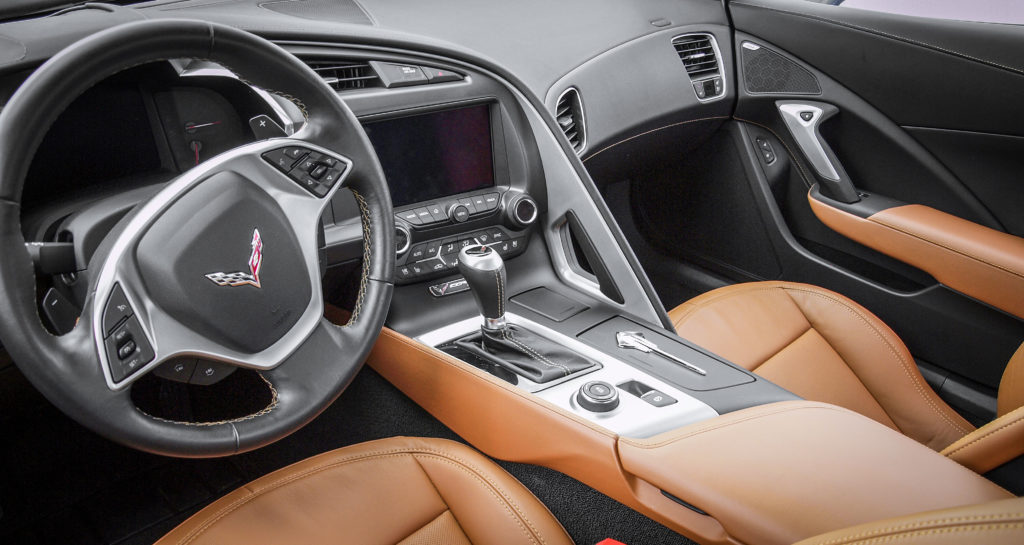 As with each generation before it, the 2014 Corvette Stingray LT1 coupe kicked off the seventh Corvette generation with all new styling, chassis and drivetrain. The redesigned C7 cockpit redefined the meaning of driver-controlled vehicles. It featured three configurable displays, including a pair of eight-inch screens and a color heads up display. One screen is integrated into the instrument cluster and the second screen serves as a media interface. 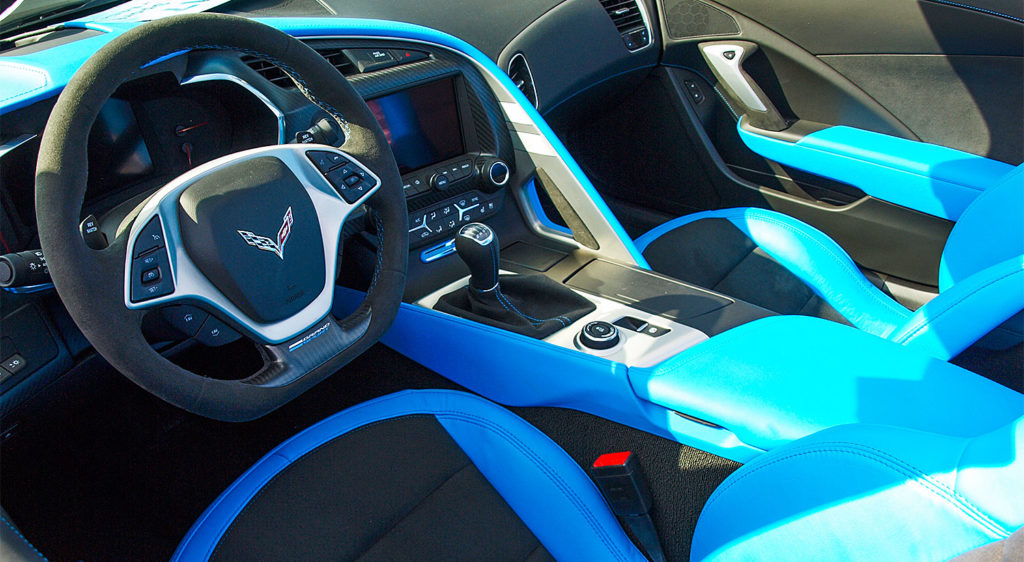 The 2017 Corvette Grand Sport Z06 is a balanced Vette for street or racetrack. It also shows that Chevrolet designed a dashboard as stunning as the supercar. The well designed dashboard features easy to read instrumentation and gives the driver the feeling of “piloting” a vehicle. The dashboard colors and lighting make it look like you are playing a game simulator instead of driving a sports car. 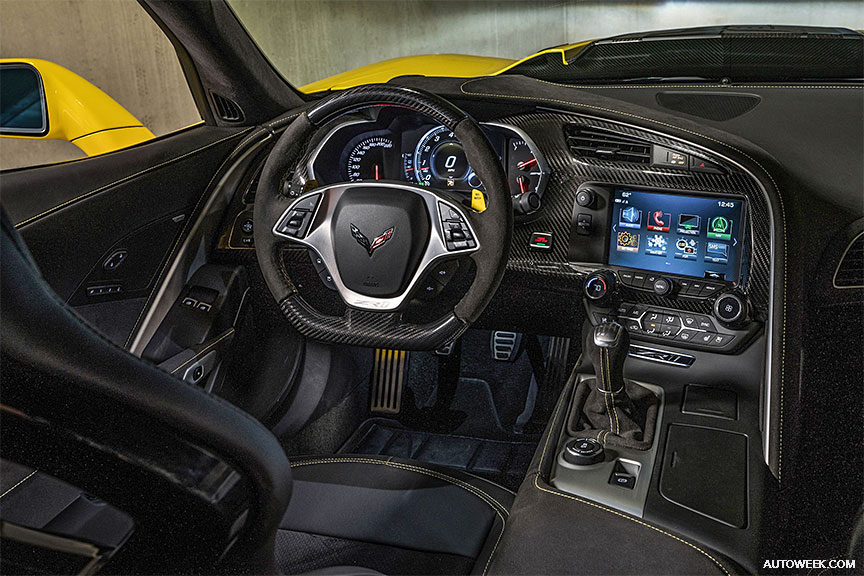 The 2019 Corvette ZR1 is the final model of the seventh Corvette generation and was designed with one purpose in mind: performance. It is also the fastest of all Corvettes with top track speeds of 212 mph and it goes from 0 to 60 mph in just  2.85 seconds. The dashboard of the 2019 Corvette ZR1 is basically the same as that of the 2017 model, but with few minor changes made to the digital gauges and a technologically improved entertainment and information system. It is a supercar that is luxurious and powerful. 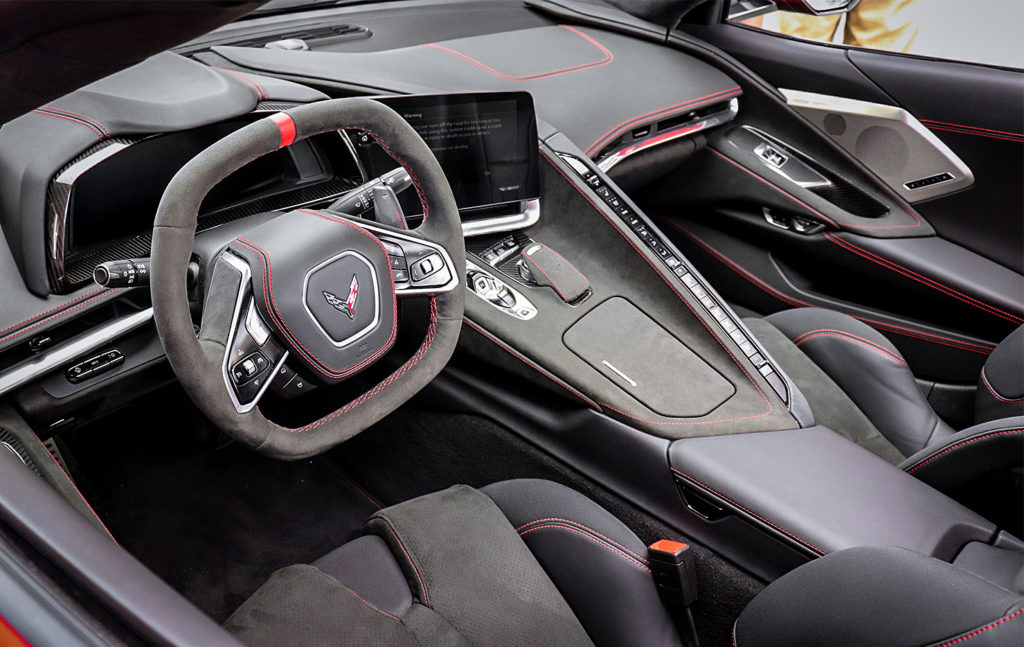 The 2020 Chevrolet Corvette is an all new mid-engine sports car redesigned from the ground up. It is the first model of Corvette’s eighth generation. Both precise and powerful, this speed demon carries more than 495 horsepower. The C8 has the most aerodynamic body design of any Corvette to date. Its interior is equally as impressive. Every detail is designed for an immersive driving experience that is tailored to each driver. Each button is thoughtfully placed for comfortable, intuitive use. There is no doubt that the 2020 C8 takes Corvette to a whole new level.