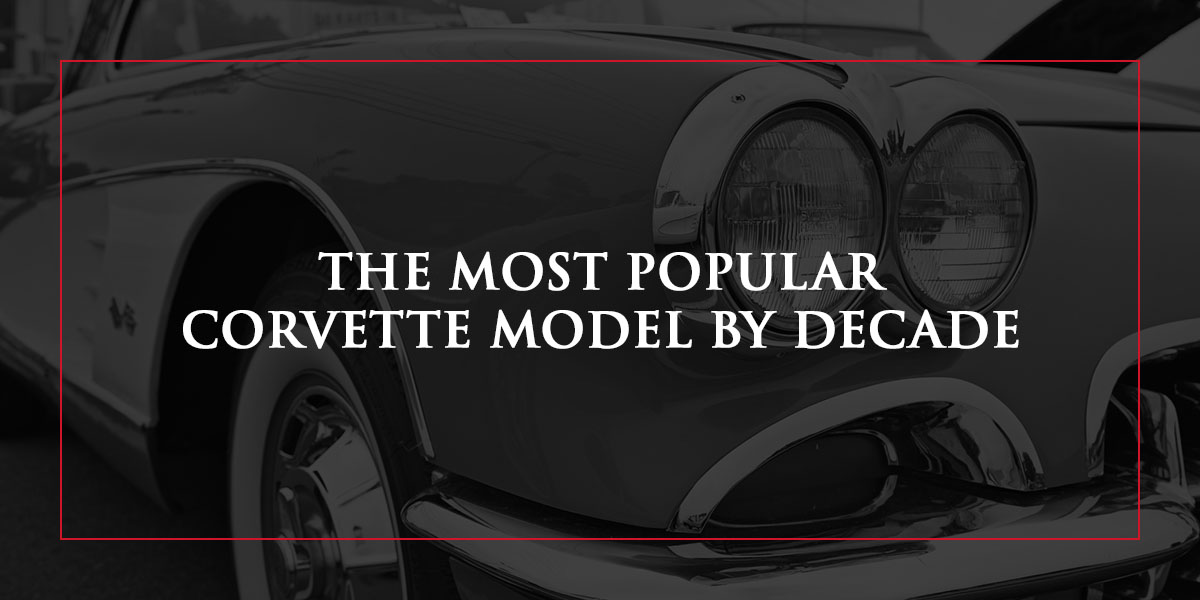 As most enthusiasts will know, Corvette divides its cars into generations, though they don’t follow a typical division by decade. If you’re unfamiliar with the particular breakdown, below you’ll find a list of Corvette generations and their corresponding years:

Learn which Corvettes can hit 60 mph the fastest and which ones are classic models — plus, get a picture of what these powerful machines can really do. Let’s dive into the most popular Corvette models by decade!

Among the older Corvette models, the engine that powers the 1957 Corvette is still a legendary engine. It’s a 283 horsepower fuel-injected V8 take on the 1956 265 horsepower V8 engine. Zora and Co. introduced the engine, among other improvements. You could choose from an optional four-speed transmission, along with a racing version of the vehicle. The racing package, RPO 684, included heavy-duty items such as higher-end springs, front-end sway bar, shock absorbers, tighter turning ratio and powerful cooling fans.

The engine is an impressive build, reaching 60 mph in 5.7 seconds — an awe-inspiring feat among other 1957 models. The race track is where everyone got to see how the 1957 Corvette could indeed produce wonder and awe in the eyes of car enthusiasts. The 1957 Corvette conquered many feats on the race track, including beating the world’s fastest car at the time, the Mercedes-Benz 300SL, by 20 laps.

Around 756 of these Corvettes were ordered, and about 51 of them had the heavy-duty racing options built in. While most of the general public couldn’t afford the high-end option, buying one turned out to be a great investment. It also broke records during its time and is still revered by car enthusiasts.

Available in both Sting Ray Sport Coupe and Convertible options, the 1967 Corvette introduced what some would consider the apogee of sophistication, style, speed and power. Corvette added a new stinger hood style and a powerful big block engine. With such a high profile — and a long-standing love from car enthusiasts worldwide — the 1967 corvette might very well be one of the top Corvettes of all time.

Most consumers had the 1967 Corvette with a 390 horsepower L36 engine or the 435 horsepower L71 engine model. However, there were some powerhouse beast models with insanely powerful engines. The L88 and L89 models were pretty uncommon but fantastic examples of the power of the ’67 Corvette.

The L89 option was very similar to the L71 engine with the added touch of aluminum heads, among other costly features. Corvette wound up only selling around 16 of them. The L88 did a smidgen better at selling around 20 units, and both were and still are rare to see. The L88 is known to have reached speeds upwards of 169 mph on straight shots, but the engines were highly unstable.

The L71 model kept a special place in people’s hearts throughout the years as it remained the most sought-after model. For the price tag, no Corvette model could muster the horsepower of the L71 until around 2006. There were some attractive limited-time options for the 1967 Corvette, such as the vinyl-covered auxiliary hardtop and the M22 Heavy Duty Close-Ratio four-speed transmission. Over 1,960 corvettes were in production with the vinyl-covered hardtop, with 20 made with the M22 four-speed transmission. 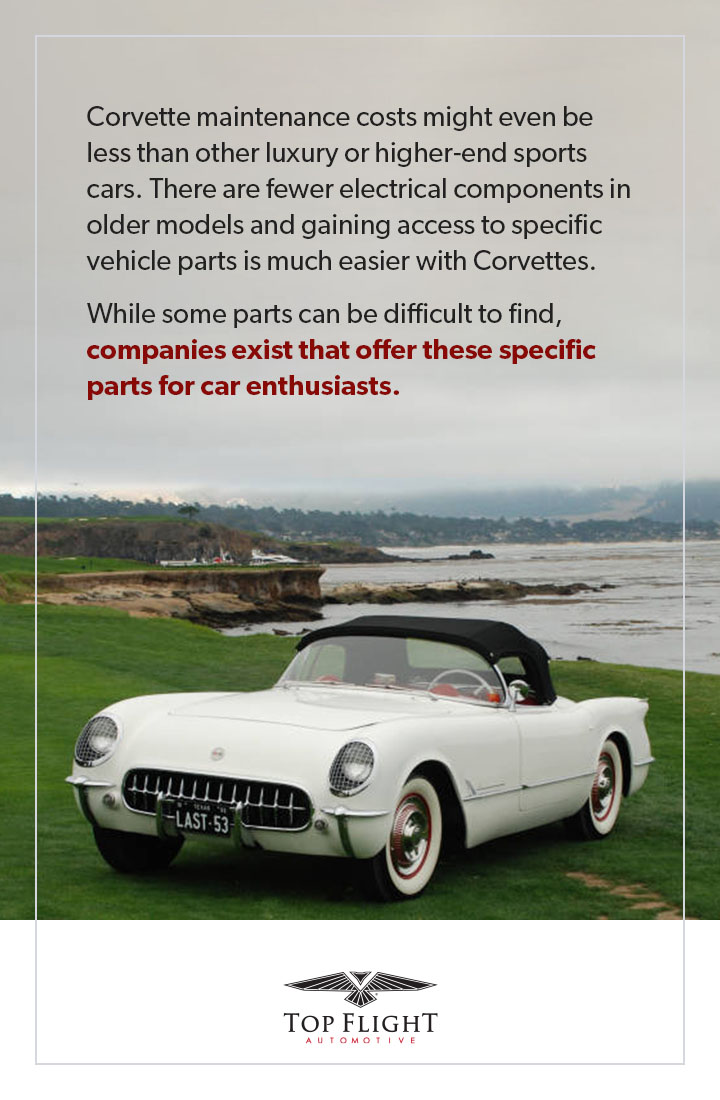 There is some debate on whether the 1971 Corvette is genuinely the top Corvette of the ’70s or not. Mainly, the discussion rests on the issue of power — this model comes with much lower power because the base engine sits at around 270 horsepower. Some even remarked that it was simply an extended run of the 1970 Corvette with a few improvements. Car enthusiasts and fans of American muscle cars know the quality build of the LS6 engine, boasting 454 horsepower, that initially found its home in the 1970 Corvette.

Between the two other versions of the 1971 Corvette, the ZR1 and the ZR2, many rare options were available. The ZR1 and ZR2 boasted M22 Rockcrusher four-speed manual transmission, HD power brakes and specialized suspension. However, all the models were low production — Corvette only made 12 of the ZR2s and they were just over $500 more than the LS6 model.

The 1984 Corvette was the first model to pass up the 50,000 unit mark with 51,547 Corvettes purchased. Even 30 years later, not a singular model year has come close to this record. Of course, some of the limelight goes to the fact that consumers have been clamoring for a new model Corvette for years, and when the wait was finally over, everyone was excited.

The 1984 model Corvette had the highest skidpad lateral acceleration of any vehicle tested and was the fastest American automobile to date, hitting 140 mph. The braking power was also something to be in awe of. From 70 mph, it could stop within 173 feet, which was better than anything from 1982 and right in line with beating the current record holder, the 930 Turbo Widowmaker.

The body of the ’84 Corvette returned the Corvette to its sports car roots with a shorter length. Corvette trimmed the body length down by 8.5 inches and cut about 100 pounds from the vehicle. Even with those exterior changes, Corvette was able to extend the interior cabin significantly, with almost 7 inches of extra shoulder room.

Many of the changes introduced in the 1984 model establish it as an essential historical piece. However, these schematics didn’t just wow car enthusiasts in the 1980s. Today it is one of the most popular among car enthusiasts, and it’s great for those new to the community due to its accessible price point. While the ’84 Corvette may not seem like a compelling vehicle with the technology and power of newer models, it was the main schematic from which future Corvette models derived.

Another Corvette from the fourth generation, the 1990 Corvette ZR-1 is arguably the most momentous model in history. The engine is still one of the most advanced that has ever seen the inside of a sports car. The automobile has a couple of nicknames, such as “King of the Hill” and “The Corvette From Hell.”

The ZR-1 had 375 horsepower in its Lotus-designed engine. Other automobile models with similarly built engines could only muster from around 225-320 horsepower. Of course, with the largely above-median powerful motor, this Corvette was a beast in the sports car community and beyond. It only took the ZR-1 4.5 seconds to reach 60 mph, was capable of covering 1,320 feet in 13 seconds and had a top speed of 175 mph. This model was complete with some of the best handling and stopping power known to anyone.

With all of these fantastic features, the ZR-1 was not without its flaws. These flaws were fatal enough that Chevrolet stopped production at the top of the year. The price point was one flaw that introduced the beginning of the end for the ZR-1. It had swelled to over $31,000, which is about $10,000 more than the 1984 model. In today’s money, that price tag would be around $61,000. It was a substantial increase in price, and most consumers were not willing to put that much down for a Corvette.

If you wanted the ZR-1 package, you’d end up paying around $27,000 more than the base price. As if that was not enough to discourage purchases from everyday consumers, the dealers took a mark-up on the vehicle, taking it to around $100,000.

The base model and the ZR-1 package look very similar, but there are key differences that make a big impact. One of these is the extra 3 inches Chevy added to the rear of the car to accommodate a set of 11-inch wheels. These wheels hugged the road especially well, though it did result in a bit of unruly road noise — though most car enthusiasts don’t mind a little noise.

The ZR-1 is genuinely a car made for enthusiasts, and for them, it is worth every penny — even when pitted against the final C4 release, the 1996 Corvette Grand Sport.

We’re skipping a generation because when the 2009 C6 Corvette ZR-1 debuted, the entire car world lost its heads. Car enthusiasts were left jaw-dropped with amazement. The sheer power and class behind the stylish sports car were truly something to be in awe of. Touting a massive 638 horsepower engine, it was unstoppable amongst other sports cars. The Ferrari 911, the Lamborghini GT-R and other high-powered, expensive sports cars were still no match for the 2009 Corvette ZR-1.

The ’09 ZR-1 was indeed a respectable mark on the Corvette lineup. Car enthusiasts from all over — even those who looked down on American sports cars — couldn’t help but marvel at its power and speed. With a torque rating of 604, it destroyed everything on the track without looking back.

During straight races, the C6 ZR-1 could hit 60 mph in 3.3 seconds. Within 7 seconds, it peaked at 100 mph and beyond. At 11.1 seconds, it could reach 130 mph, leaving almost everything else in the dust. Combining these stats with the car’s official top speed of 205 mph, it broke the barrier of 200 mph vehicles.

When the ZR-1 was born, it gave consumers and car enthusiasts alike a powerful, stylish and high-end car for $100,000, making it the most expensive Corvette production. The car was not just for racing, either — it had an extremely comfortable interior for daily driving. This ZR-1 had all the perks an everyday driver would need for their commute to work, along with the high-end power of a sports car.

The 2009 ZR-1 recalibrated the definition of the supercar, doing what no other car before it could. After its release, all the other performance cars were playing catch up to try to keep pace. The 2009 Corvette ZR-1 was only on sale for one short year, selling 1,415 units.

Among the new Corvette models, the 2019 Corvette ZR1 is the perfect car to complement Corvette’s history of excellence and innovation. The 2019 ZR-1 is the most powerful Corvette ever to grace the asphalt with its presence, and Corvette accomplished things it never had before with this model. The sheer power behind this beast means it’s actually illegal to drive in Europe.

The engine is very loud and some even report flames coming from the exhaust when the car is at full throttle. The fire explosions in the exhaust are an inherent effect caused by the dual-fuel injection system, an industry-first. And despite its immense power, the 2019 ZR-1 still has great turning stability thanks to its electronically controlled rear differential.

The ZR-1 has 755 horsepower and 715 pound-feet of torque. The car has the nickname “The Orange Devil” and can reach 60 mph in 2.8 seconds and has a top speed of 212 mph, destroying records and creating a name for itself. The top-flight speed is due to the 2019 Corvette ZR-1 incorporating the highest percentage of carbon fiber parts ever. 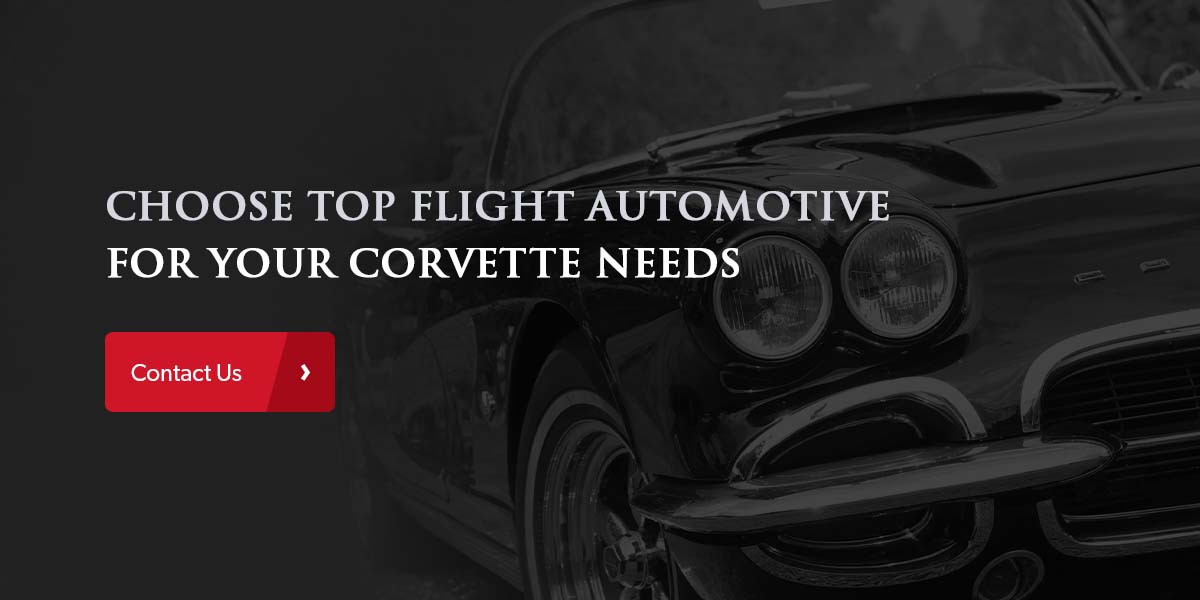 Ranking the best Corvettes is a tough feat. But no matter which Corvette you think is best, when you are updating, repairing or modifying your Corvette, think of Top Flight Automotive. Top Flight has the largest availability of parts to repair or upgrade your Corvette, no matter the year or model. No matter the generation of the Corvette you have, Top Flight will have the part you need. We carry a large selection of parts and mods for the C1 through the current C8 generation.

Don’t let your Corvette and the history behind these fantastic sports cars go to waste buying subpar parts. Choosing your parts from Top Flight doesn’t just ensure you put quality work into your car — you also get same-day shipping on most orders and access to our experienced sales staff who speak fluent Corvette and can provide solutions to your needs.

Your Corvette is too special to risk going anywhere else. From interior and exterior parts, brakes, wheels and tires, accessories and more Top Flight has you and your Corvette covered.

Contact Top Flight Automotive today and show your Corvette that you care!