Back to Top
Home / Blog / Radial vs. Bias Ply Tires 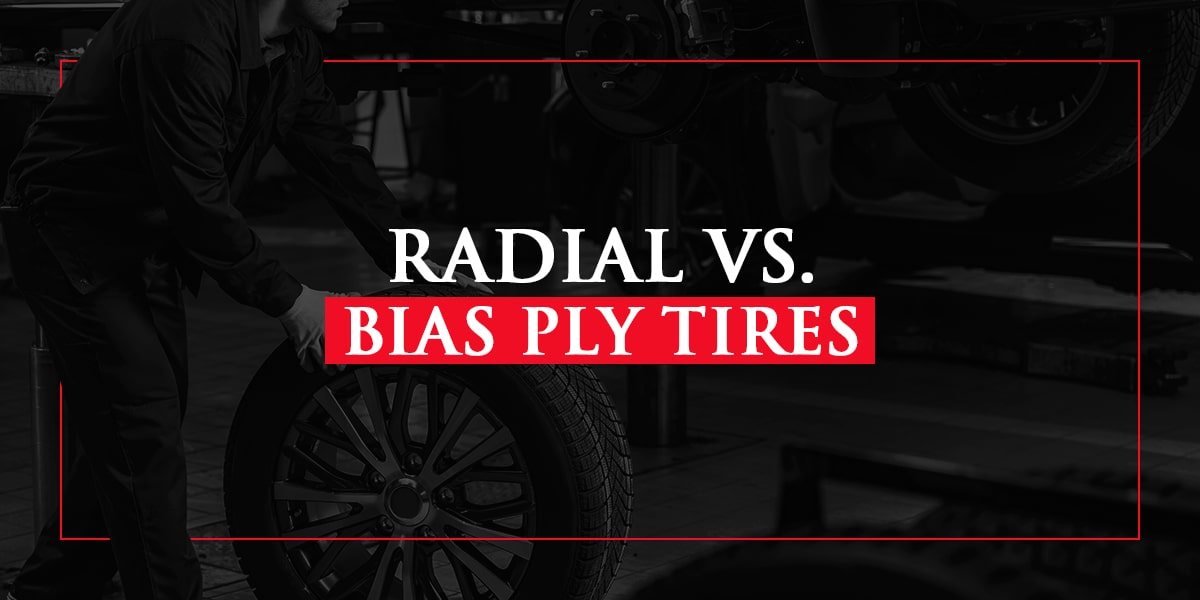 As you restore a classic Mustang or try to mod your current ride, knowing the difference between radial tires vs. bias ply tires is crucial. Radial tires are the primary type of tires used in the industry today as they are more maneuverable and are designed to go high speeds quickly. Bias ply tires, sometimes referred to as slicks, are still appropriate for specific contexts and are regularly used on construction equipment and some motorcycles. 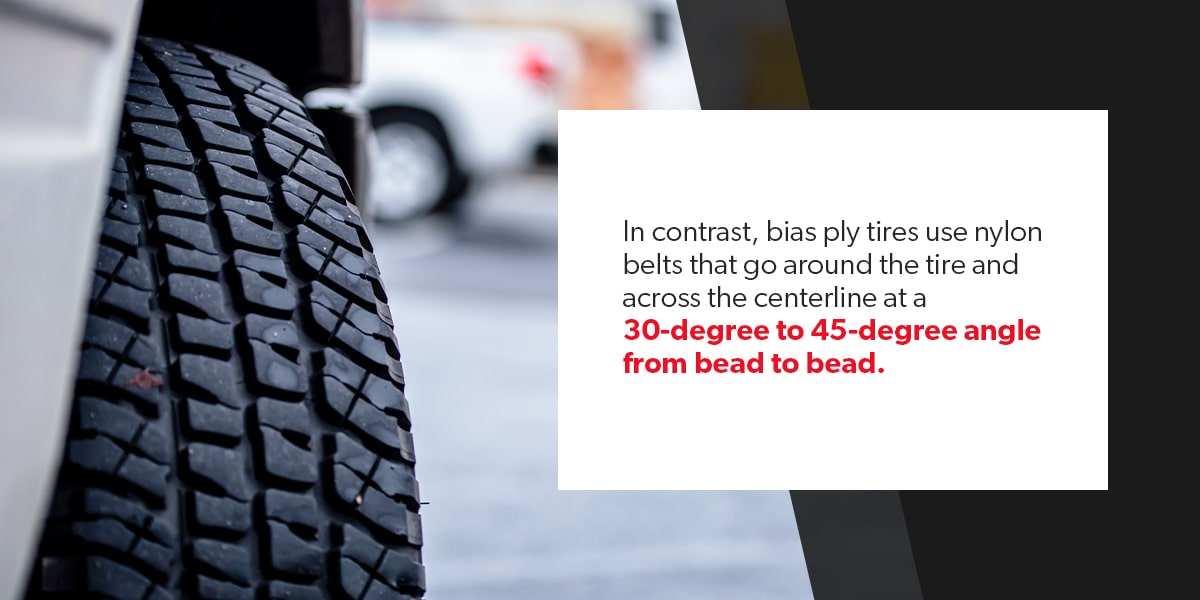 What Are Radial and Bias Ply Tires?

Radial and bias ply tires are suited for different applications and have some key differences. Radial tires have steel belts running along the tire’s centerline at a 90-degree angle. Due to the 90-degree angle, the plies, or steel belts, run straight across to every bead of the tire. In effect, the design of a radial tire ends up allowing the tire’s tread and sidewall to function independently from each other.

In contrast, bias ply tires use nylon belts that go around the tire and across the centerline at a 30-degree to 45-degree angle from bead to bead. These tires generally have multiple layers, with each layer of the nylon crisscrossing each other and forming a tough, rigid structure. Since the plies overlap each other, the sidewalls and crown of the tire end up being interdependent.

Typically, bias ply tires have a narrow tread profile that delivers a sort of piecrust appearance. They can also be identified by their sidewall bulge because the tires are mounted on narrow wheels.

Many traditional car owners gravitate towards bias ply tires since they were used on cars until the 1970s. Classic car restorers who are trying to restore a vehicle prior to that time often like using them since they provide a level of authenticity. The sidewall bulge and narrow tread are both common elements of vintage cars, which means adding the tires to a classic car gives it a more classic look.

It’s important to understand bias ply tires have largely gone out of fashion except for very specific uses. After Sears starting selling radial tires in the late 1960s in the United States, more car companies started outfitting their vehicles with them to give their vehicles greater safety and maneuverability. By the early 1980s, all cars built in America were outfitted with radial tires.

To understand why bias ply tires are still relevant after being largely replaced by radials after the 1970s, you need to know the pros and cons of each tire type. As you learn more about the differences between the tires and which one is right for your Mustang, consider their advantages and disadvantages: 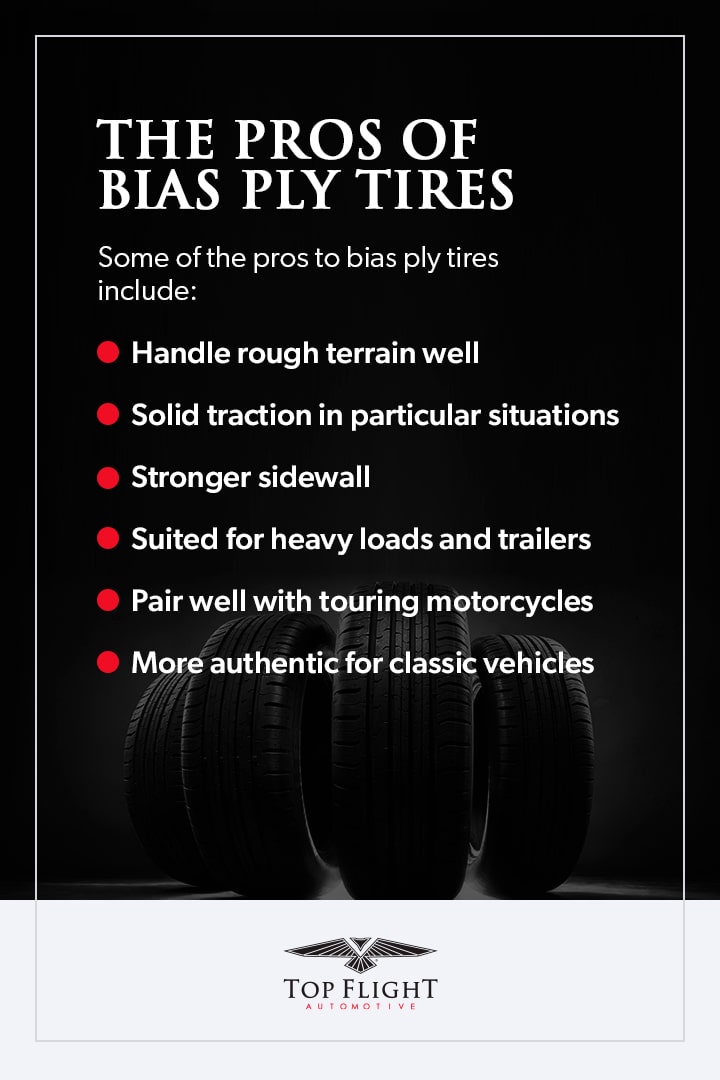 The Pros of Bias Ply Tires

Before the shift to radial tires in the 1970s, bias ply tires were the most common tire type for most automobiles of the day. Though they have some notable disadvantages that led the auto industry to switch to radial tires, they still have excellent advantages that are suited for specific applications today.

Some of the pros to bias ply tires include:

The Pros of Radial Tires

There are a lot of pros to radial tires that make them perfect for everyday driving and high performance. As you compare radials vs. slicks, you should be aware of the top advantages of radial tires:

The Cons of Bias Ply Tires

There are a few cons to bias ply tires that keep drivers from using them. There are many functional reasons radial tires became standard after their introduction, while bias ply tires faded into the past.

Some of the major disadvantages to bias ply tires include:

The Cons of Radial Tires

Radial tires are no doubt an upgrade from bias ply tires for most drivers, but they still have some disadvantages. One of the primary disadvantages is their increased vulnerability whenever they’re under-inflated or over-inflated. Whenever the tire’s not inflated properly, it’s more likely to bulge, leading to a greater chance of punctures or damage.

If you’re into drag racing your Mustang, the subject of drag radials vs. slicks will be a major concern. Each option is going to give you different advantages in the field, with some racers preferring one tire over the other. It’s important to note that slicks or drag radials both tend to have very little or no tread pattern at all. They’re designed to make as much contact with the ground as possible.

Since the bias ply drag tires and radial drag tires don’t have very much tread, they wear down quickly and need to be replaced with greater frequency than tires constructed for daily use. They also don’t perform well in the rain, so any time you take them out on the road, you’ll need to check the weather first.

Some drag racers turn to bias ply drag tires since they let users launch with greater force and power. Additionally, a drag slick’s sidewall wrinkle makes it well-suited for drag racing and preventing damage to cars. At the beginning of the drag race, power gets sent straight to the rear wheels at a rapid speed. The bias ply tire’s wrinkle helps to protect the rear axle from damage as it absorbs some of that power’s impact.

Other drag racers prefer radial drag tires since they keep the vehicle more stable. Drag radials are soft, so they also don’t require as much burnout to get them rolling. Drag radials tend to have some kind of wrinkle wall that can help absorb the launch power. Ultimately, the choice between slick or drag radials comes down to the racer’s personal driving preferences.

Which Type of Tire Is Best for Mustang Owners?

Unless you plan to take your Mustang on short drives only or want to restore a first-generation Mustang for showings, radial tires are the better option in most situations. A Mustang isn’t going to be towing huge loads or driving across rough terrain, so it’ll be difficult for drivers to make use of the benefits bias ply tires provide.

Since radial tires take turns better, maintain their performance at high speeds and are more durable, they are the better option for the average driver. They’ll give you greater control while you go about your daily life and will hold up in times when you need to go long distances or reach higher speeds. If you like to race your Mustang on twisty tracks or roads, radial tires are a must since they give you greater control while cornering.

While radial tires are the more practical choice for most Mustang owners, there are still some times where bias ply tires may be the preferred option. Those who want greater authenticity for their first-generation Mustang may choose a bias ply, for instance. Those who like to drag race with their Mustang may prefer the greater launch force bias ply slicks give. 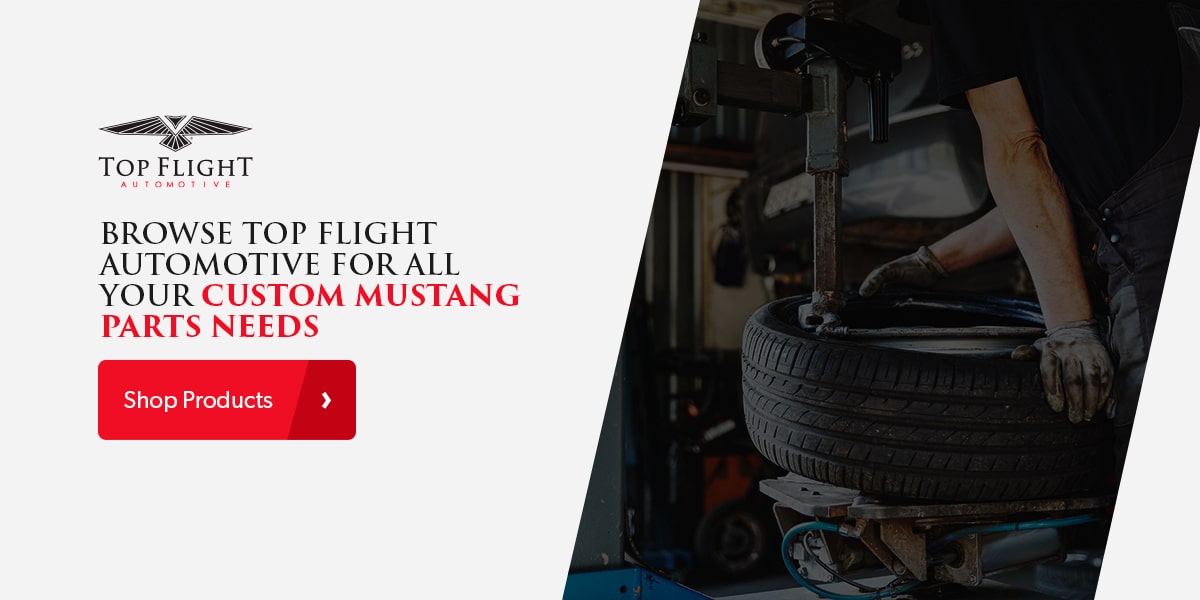 Top Flight Automotive is the go-to destination for any Mustang owner. We have a huge inventory of Mustang parts and accessories that can help you customize or restore any generation. As you browse our store, you can find everything from tires for your classic Mustang to a supercharger to give your engine an extra burst.

If you’re in the market for tires for your Mustang, check out our selection and shop online today.