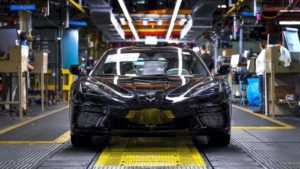 The first eighth-generation Corvette (or C8) to roll off the line was a black-on-black unit that was won at auction last month for the princely sum of $3 million. Its buyer was none other than auto dealership mogul and NASCAR team owner Rick Hendrick, who got to choose the exact build specification of his car—as you’d hope he would for that kind of money.

Hendrick opted to load his car with every available option, starting with the 3LT interior package, which decks the C8’s insides in Nappa leather, suede, and carbon fiber. This package includes heated and ventilated “GT2” seats and every technological toy available from General Motors today, including a Performance Data Recorder, a head-up display, wireless phone charging, theft-deterrent tech, and SiriusXM satellite radio that plays tunes through a 14-speaker Bose sound system.

While you’d think Hendrick would put as many miles on this Corvette as he pleases, he’s pledged never to drive the car. Instead, the first C8 Corvette will go on a truck that’ll take it to Hendrick’s private museum at the Hendrick Heritage Center, where Corvettes make up 120 of the 210 cars on display. Being the Corvette fanatic that he is, one expects Hendrick to order a second C8 (if not more) in a similar specification for road use, where he’ll get the most out of the C8’s Z51 performance package, which has traditionally offered some of the best performance for your dollar.

For C8s, the Z51 package includes unmissable upgrades such as functional aero, bigger brakes, Michelin Pilot Sport 4 tires, and an electronic limited-slip differential. An included performance exhaust inflates the C8’s power output to 495 horsepower and 470 pound-feet of torque, which pair with an eight-speed automatic transmission to rocket the C8 from a standstill to 60 mph in just 2.9 seconds. That’s hypercar territory, and it should make the likes of Ferrari quake in their boots at the idea of more powerful Corvettes yet to come.

Chevrolet dealerships are expected to receive their first shipments of 2020 Corvette Stingrays at the end of this month or early next month. It’s not worth camping out at your local Chevy dealer, though, because 2020 Corvettes were almost sold out as of last July. If you don’t have your name on a 2020 already, you’ll probably have to wait for the 2021 model to get behind the wheel of the revolutionary, mid-engined Corvette.